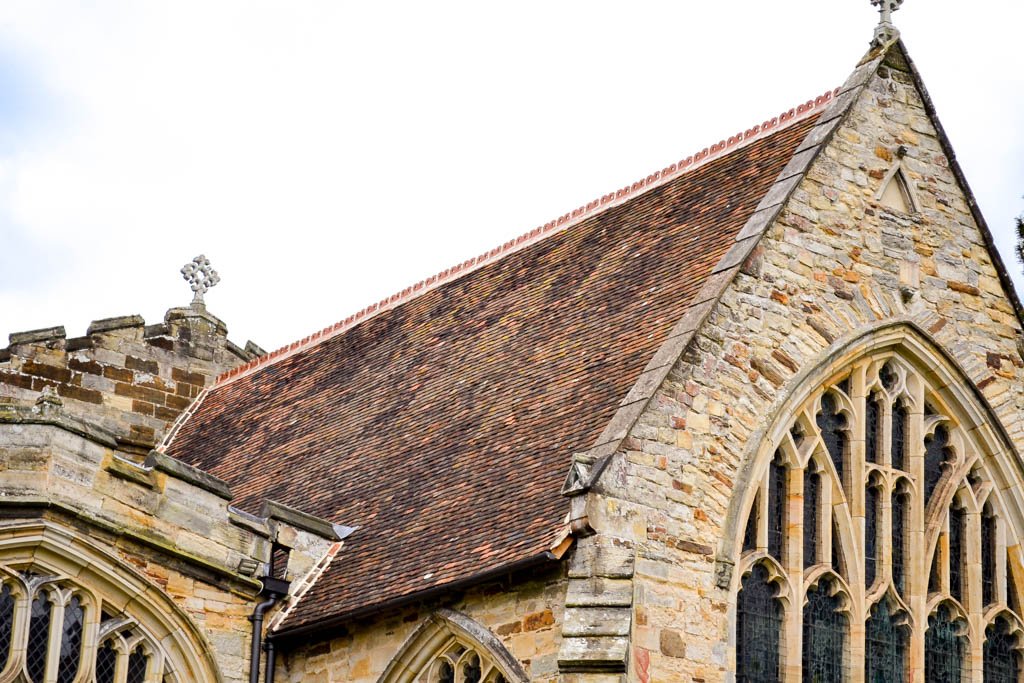 We were instructed by Clague Architects to replace the south elevation of the roof of St Stephen Chapel at St Dunstan’s Church in Cranbrook.

Image 1 in gallery – Early on in the contract we can see the new Tyvek Supro breather membrane and the new tanalised battens. Underneath this are the diagonal rafters, with internal oak boarding underneath. The remaining old roof is above this, and is removed in due course.

Image 2 in gallery – Shows the original tiles loaded on the roof ready for the addition of the second hand Kent Peg tiles sourced for this contract.

Image 3 in gallery – Around half of the Kent Peg tiles have been laid, the original ornamental ridge tiles were reused and bed in traditional hydraulic lime mortar, which is so important with historic buildings.

Image 4 in gallery – Here, we have a sense of perspective, there are around 10,000 Kent Peg tiles on this elevation, more than most domestic properties. The ladder in the left of the image gives some idea of scale, and the very large size of churches as a whole.

Image 5 in gallery – The finished contract with the scaffolding down. Visible here are the traditional tile listings at the abutments. This is not only historical, but necessary as there is no brickwork in which to put a conventional lead flashing detail.

Image 6 in gallery – Another aspect of the contract, also visible on the far right, is a new green oak rafter that was installed due to the previous suffering many years of water ingress and decay as a result. On the left are the new decorated rainwater goods, in a special polymer paint to match the tower at the other end of the building which has just had major renovation works.