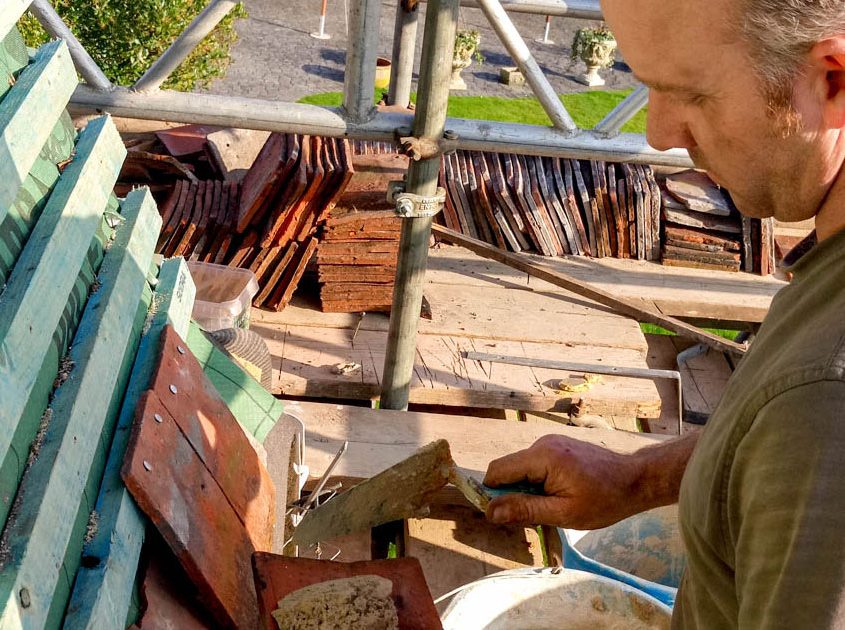 We were approached on recommendation regarding this project. The crux of the problem was the inadequate fixing of the Kent Peg tiles to the square kiln. As a result there was considerable tile slippage that had become dangerous, especially in strong winds.

Image 1 in gallery – Here we have the removal of the Kent Peg tiles, that were only hung on the battens. Underneath is the old non breathable 70’s bitumen based felt. It was also noticed that there was ‘sweating’ going on due to a build up of moisture in the structure, and inadequate ventilation.

Image 2 in gallery – The removal of the tiles, battens and felt is complete. The roof void is cleared along with any debris.

Image 3 in gallery – This image shows the new 50mm x 25mm tanalised battens fixed in place with collated nails to resist corrosion. Underneath this is the new breathable membrane. This ensures water vapour can exchange with the exterior, thus reducing condensation and keeping temperature and humidity levels more stable. At the base of the roof is a purpose made polyester eaves strip to prevent water being blown back between the bottom of the tiles and the top of the gutter, to prevent water marks on windows or weatherboarding for example.

Image 4 in gallery – The first course of Kent Peg tiles being fixed. Starting with the eaves, the first coarse is bedded in hydraulic lime mortar and fixed with two aluminium clout headed nails. This ensures the roof is secure at the eaves. It is good practice to bed all perimeters and some intermittent courses for this reason.

Image 5 in gallery – A number of courses of Kent Peg tiles have now been fitted, all fixed with two clout headed aluminium nails. We use aluminium as it is a soft, yet strong metal allowing the easy removal of the tiling in 150 years for example. This reduces losses in the future. Galvanised nails should not be used for this reason.